Ericom has launched the Remote Desktop app called AccessToGo for iOS and Android, which lets you access your Windows computer from your phone. This is, hands down, the fastest and smoothest remote desktop client I have tried to date. It loaded right up, I had no problems connecting to my laptop, and I was up and running. It opened my documents perfectly, and it didn’t feel like I was sitting around for a long time waiting for things to load, which I had experienced with clients in the past.

There is some lag, you are accessing your desktop via a client running on top of Windows, on an Android device that, while probably fairly powerful, still won’t match your desktop for sheer processing power. Probably… So it will take some time for all that to communicate however, at the same time, it just felt downright zippy compared with what I was expecting.

See for yourself in the video below:

And the mouse. Oh the mouse. One of my biggest complaints with most remote desktop apps has been the clunky navigation around the screen, as it tried to translate a touch screen interface into a mouse-based one. AccessToGo seriously made it seem, again, effortless. I have no idea how much coding had to go into this, but it just works, every time, for every click, even when I tried the button that gave me a right click. It was always right on target too, so the mapping here was just excellent.

Speaking of input, the keyboard is always a concern with these apps because, if you’re accessing documents, odds are good you will probably want to work in them as well. Instead of forcing an arbitrary keyboard on you, when you press the keyboard button, your default Android keyboard (I use SwiftKey, personally, and I am currently rocking the fuchsia theme) pops up. I really, really liked this feature, since it meant I could use a keyboard that I am already very familiar with, and that, in my case, has all my word predictions so I can type faster. It was an unexpected, but nice, touch.

If you travel at all, and you need to access your computer when you’re away, then this is a client you will want to check out. There are others out there, but none have beat this one thus far in ease of use or speed.

This is going to be very user dependent. Some people will probably access it daily, if not multiple times a day, and others won’t use it very often, but when they need a file they left on the computer at home or at the office, it will be a life saver.

The app interface before you get into your desktop is very simple, with a black and grey scheme. It’s not really meant to be more than a gateway to your own desktop, and from there, it’s going to look like however you have that machine set up. 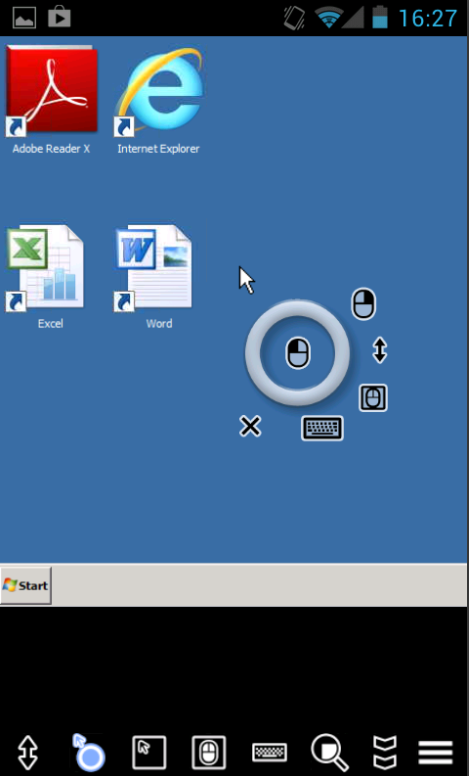 This is one of the best remote clients I’ve tried to date, and I was just really impressed with it, especially since you don’t need a subscription to play with the basics. If you need or use a remote desktop, this one is worth checking out!